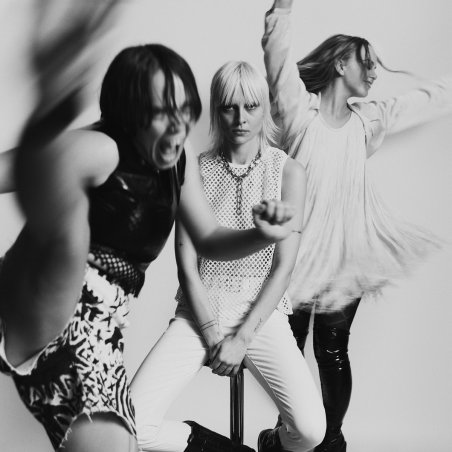 “We just want it to be out,” beams Rakel Mjöll, ahead of the release of Dream Wife‘s highly anticipated forthcoming LP, So When You Gonna… (out 3rd July via Lucky Number). Declaring it as the “best thing we’ve ever written” is a huge shout considering their eponymous debut record was applauded by fans and critics alike – but as Rakel puts it, “we had such a great team working on this record and being free to go into this creative rollercoaster of emotions and state of flow with your friends and to find sheer joy from doing so is the best feeling.”

Discussing So When You Gonna…, Rakel reveals “We absolutely loved the process of making this album. From writing these songs to recording it with our team;  we want people to hear it!” It was recorded with Marta Salogni (Bjork, Frank Ocean, The Orielles) – someone they declare an “icon.” The process, which took place for “a full month in the studio last autumn” has been deemed “chilled, encouraging and just a beautiful time to create” and one that contributes to the minuscule number of records made including a female producers.

“We ourselves did not realise it was this low – it is fucked up that only 3% of albums released last year had a female producer involved.” Dream Wife‘s approach involved an almost all-femme personnel (except drummer Alex), reducing that percentage even further – and instead of highlighting it as a success story, Rakel clarifies “it was important for us to talk about this in the recording sessions and also now. We need more platforms for womxn interested in working behind the scenes in music and have an opportunity to do so.”

This theme remains for much of the conversation and with the unprecedented cancellation of most gigs and festivals across 2020, Dream Wife call for a shift in the way the music industry operates, demanding that we “hire more womxn to produce, mix, master, engineer,” because “representation is important for our future generation. Human’s need their stories told, not just one side to a story told by one group.”

While festival season might not take place ‘normally’ this year, Rakel reminisces about festival season of yester-year, saying “Primavera was by far one of the best festivals we’ve ever played at and attended” – both musically and in terms of representation. Branding themselves as ‘the new normal,’ the Barcelona event has pledged to have a 50-50 split between genders across the line-up and this format is something that Dream Wife champion – discussing its importance, Rakel confesses that “I saw a majority of femme and non binary acts BY CHANCE by walking between each stage seeing these incredible and diverse performers come alive on stage.”

Simply put, “diverse stories and gender balance being present on stages around the world will just make a way more interesting and fun experience for all!” Whether that is in the studio or at festivals around the world, it is time to embrace the new normal.

Tickets for Dream Wife’s headline tour – including a show at Rescue Rooms – are available now. Buy yours here.

So When You Gonna… is released on July 3 – exclusive variants are available now via Rough Trade. Pre-order here.