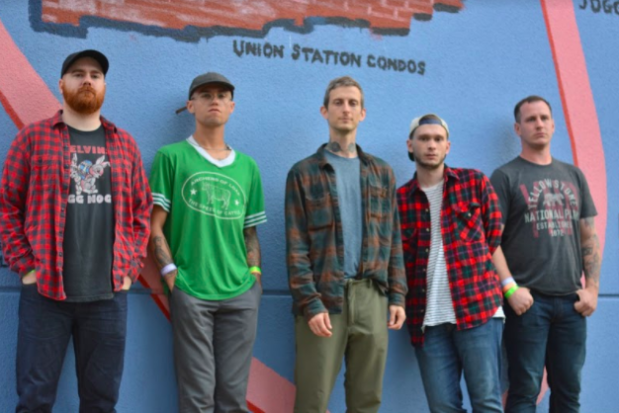 “I feel like I live here,” jokes Patrick Kindlon as we meet outside of Nottingham‘s Rescue Rooms ahead of their show supporting Boston Manor.

It isn’t just the hospitality of the city that Kindlon finds homely – it is also the response DRUG CHURCH have received on this whirlwind tour of the UK. “I’m finding Boston Manor fans to be open minded. If they hate us, they’re not telling us – there’s no fruit being thrown at us!”

With the release of Cheer next month, Drug Church have plenty to be optimistic about, however Patrick often removes himself from “the details.” Reminiscing, he reveals “the other day I was helping my mother move and I was complaining about my life in general and she said ‘I feel you. The details are the worst part of life.’ My mother has had to concern herself with the details because she had four kids and they’d starve to death if you don’t pay attention to the details. For me, I never had kids, so I’m still avoiding the details as much as possible. I don’t want anything to do with the details.”

There is a certain lack of ‘care’ surrounding Patrick, but something that he greatly cares for is how Drug Church are received in the UK. Comparing this side of the pond to their native USA, he says “I think it would be fun to be a sizeable band here [than in the US]. It’d be great to come over here every four months, play fifteen shows and that could be my career.” Although the details aren’t something Patrick cares for, the desire to ‘make it’ over here is something that he has spoken about with people away from the band – “I was talking with out UK booking agent the other day and I was saying ‘the UK is the only place I want to get big.'” This isn’t strange when you consider the perks of an American band hitting the roads of the UK instead of home soil, albeit being only fifteen shows maximum.

The perks found by Drug Church include “In my experience, touring the UK you have more of an age variety. In the United States a lot of times people see going to shows past the age of 25 being something they do a few times a year. In the UK we have fans who are 55 and they’ll come to a show, have a pint at the back and not feel any way about it. In the US, if you’re 55 and go to a show you might think people are looking at you sideways.” The age variation mentioned is definitely evident at Boston Manor‘s show in Nottingham. Doors are early (6pm) and the neighbouring bar is filled with everyone from freshers to those who have seemingly turned up to the gig straight from work.

The atmosphere is building and there are plenty of people at the show to catch a glimpse of all four bands on the bill and that’s when Patrick’s most poignant point comes to fruition – “UK fans seem to want you to win, too. Have you noticed this? Boston Manor fans want them to be successful and have things. They want Boston Manor to get bigger and grow.” This sounds strange considering the majority have paid £12ish to see Boston Manor tonight, but as Patrick continues, “in the US, a lot of times after you get to a certain point your fans are like ‘I don’t know about you, man.’ Here, it feels like Boston Manor fans want them to do the big festivals and be able to feed themselves.”

The final perk of touring the UK we cover is, as it is with pretty much every American band we’ve spoken to, Wetherspoons. Describing it as “inexpensive and you can order mushy peas with an app,” I find out that “it used to be Nando’s every American band talked about,” but now, because it is ‘Spoons because of the “vegan English breakfasts.” As Patrick points out, “the UK has a lot of vegan spots – in each town I try to find the one that does the fake English breakfast with the fake sausages. You guys are killing it with that!”

In terms of English band touring in America, advice is offered when Patrick explains “for an overseas band you want to make it count so you’ve got to do at least a month. It is asking a lot of someone to be on a different continent for 1/10th of a year and it can be a bit much.” Other advice that is about when it comes to curating a line-up – he suggests “I don’t think any sane person wants to see the same thing four times, y’know. That’s a long ass show if you’re watching the same thing all night.” In Drug Church‘s experience, Patrick expresses “we’ve done tours as a support band and the headline band have had complaints like ‘why aren’t the other bands exactly the same as you?’ so there is always someone out there that wants the same thing, but that’s not me.”

This tour for example has played host to Wallflower and Microwave as well as Drug Church and Boston Manor who all represent different sounds, but come together to create a well-staggered evening. Talking of how things work behind the scenes, he jokes “it is only good because we get along. If we hated each other it’d be a situation!”

Closing with an ever-open mind, Patrick leaves something that is great advice that should resonate with every gig-goer both sides of the pond: “Even if I hated something, if I only had to hate it for twenty minutes I am sure I’d appreciate the change. I might even say ‘that’s twenty minutes I can complain about.’

One thought on ““THE DETAILS ARE THE WORST PART OF LIFE” | ‘DRUG CHURCH’ REVEAL THEIR DESIRE OF WANTING TO BE BIG IN THE UK, TOURING WITH BOSTON MANOR AND MORE – INTERVIEW”