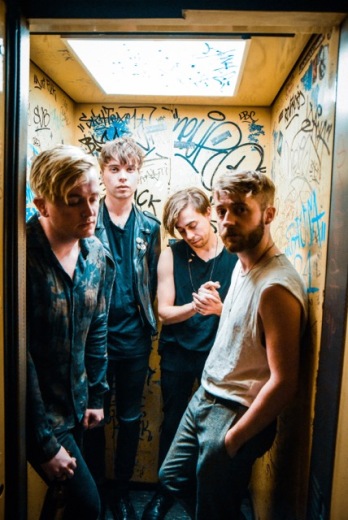 “We arrived to the first show to see that our dressing room had literally been turned upside down and the radiators turned up full blast,” says CONOR ANDREW WYNNE – lead guitarist of Dublin indie-outfit OTHERKIN about their recent run of shows with The Amazons.
Ahead of their own run of headline shows, Otherkin have lapped up phenomenal support and it was made evident by the amount of fans, new and old, that flocked to the merch desk afterwards to pose for selfies and sign copies of latest record, OK. Said record has now been out for over a year and Conor is beaming with how well people have accepted it. “The reception has been amazing! It just seems to be growing as the months go by.”
Not only is it fans who have taken a shine to Otherkin, but also performance boffins: “We placed at number two in the Irish charts, which was absolutely mad. Then we toured it all around Europe.” On the subject of touring, Conor informs us that although their tour is short, it will be most definitely be sweet. “It is going to be crazy only being on the road for five dates considering the last time we were on a headline tour it was for two and a half months.
“We can’t wait to get back on the road and play shows again. We are really looking forward to this tour!” Having such a warm welcome with The Amazons gives Otherkin a massive boost before taking the driving seat and commandeering the ship from Glasgow to Birmingham via Newcastle, Manchester and London. If their winter shows are anything to go by, for example “the crown going absolutely mental by the second song,” the headliners will be phenomenal.
Hopefully many of the same faces will be back for round two, especially after “a lot of people said they had never heard us before and can’t wait to catch us again.” For those who do plan on heading to the intimate gigs, OK will be performed in full with “more,” teases Conor. To allow fans to relive the show, “a live album called ‘Deutschland K.O that was recorded over two dates in Germany is going to be available to buy on vinyl at this tour. There is only a limited run so make sure to get down to these shows to nab one.”
—
OTHERKIN HEAD OUT ON TOUR FROM TOMORROW (APRIL 3RD)
TICKETS AVAILABLE HERE