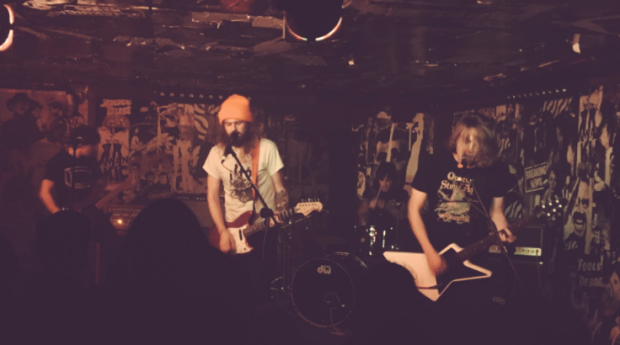 SORORITY NOISE kicked off their first UK headline tour with a show at Newcastle’s intimate Think Tank? Belting out hits from their debut LP ‘Joy, Departed’ and sophomore release ‘Forgettable,’ it will go down as a show to remember – for both the band and fans.

The Hartford, CT, four-piece’s sound dabbles in the genres of pop-punk and emo, but they also immerse their audiences in a soothing ambience that stills their otherwise wild on-stage antics for brief periods.

Sorority Noise were just hanging around the venue and smoking section before entering the stage at around 915pm and opening with Nolsey. From this moment you could identify the die-hard fans by their passionate belting out of anything put before them.

Catchy lyrics are what Sorority Noise bring to the metaphorical table, and hearing them crisply roll off front-man Cam Boucher’s tongue was a pleasure. Corrigan’s “I wanna be the spit that tingles on your lips,” and Dirty Ickes’ “I’ve learned to love myself more than I could ever love you” are personal highlights and I am thankful to have heard them live.

There was a no-nonsense approach to their live performance – speaking infrequently and just getting on with playing an emotionally charged set was the route Sorority Noise headed down.

Using Either Way to encourage people to speak out about mental illnesses was a beautiful moment and fans gathered afterwards to open up to Boucher and thank him for the reassurance. That, and Mediocre At Best were memorable moments that I will not forget for a long time.

Playing a sub-hour set was enough for the fans who had eagerly waited to see the band again after their last UK stint support Gnarwolves. Penultimately giving Using an outing topped off an amazing set from a band who definitely deserved a bigger crowd.

Tickets for the rest of Sorority Noise’s UK tour are available here.

One thought on “A REVIEW OF…SORORITY NOISE IN NEWCASTLE”