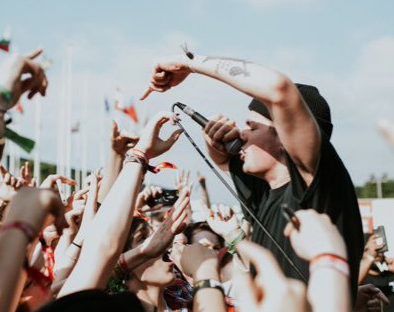 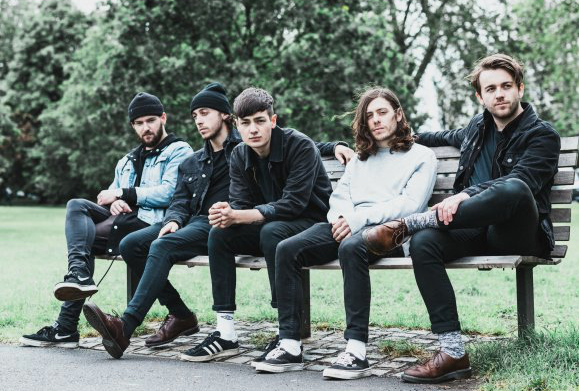 BOSTON MANOR are rapidly becoming one of the most recognised name in the pop punk/emo scene. With their debut album, Be Nothing, released on September 30th, 2016 and 2017 will be the year the Blackpool pop-punks cement their name on the UK ‘scene.’

Heading out on a three month US, EU and UK tour between the release of Be Nothing and the end of the year, I spoke to frontman Henry Cox about literally everything – from speaking foreign languages to which bands have been most helpful to their career.

Before getting the interview started, Henry jumps straight in and asks about the weather, wondering where I am located and what has been going on recently – approaching with a genuine interest is a strange one, seeing as most other bands want to get interviews over as soon as possible!

“I know Middlesbrough quite well – I have a few mates who live in Redcar, so I have been up there a fair few times over the last few years!”

MOST BANDS NOWADAYS PLAY THE CLUNY IN NEWCASTLE, FOR EXAMPLE WE SAW MODERN BASEBALL THERE A FEW WEEKS AGO.

“I’ve never been there, we pretty much always play Think Tank? when we come to Newcastle – it is a cool little venue. It is cool, that place. I’ve never been in Newcastle separately to find where it is in the city.

“Have you ever had that about a place? Like, you’ll go to certain places with other people and you’ll not quite know where you are…so you’ve been to that city, but you’ve been to five different place each time and you’re not really sure how they all connect.

“I always come to this venue via the same road, park up, walk to the pub across the road and that’s about it – I don’t really know where it is in relation to anywhere else…”

DO YOU KNOW WHERE THE O2 ACADEMY IS? THAT IS A GOOD STARTING POINT.

“Vaguely, yeah! We played there a long time ago with AS IT IS, I say a long time ago, but it was only just over a year ago! Academy 2 I think it was, the small one?”

YOU PLAYED WITH KNUCKLE PUCK AS WELL EARLIER THIS YEAR, DIDN’T YOU?

“Yeah! That was Think Tank? as well! I think this will be our fourth – I do like it there though!”

BOSTON MANOR HAVE A FEW SHOWS AS SUPPORT AHEAD OF YOUR OWN TOUR – HOW ARE YOU FEELING ABOUT GOING OUT FOR THEM?

“The Moose Blood one is going to be amazing because they are really good friends of ours. It is a really exciting time for them – they have just had an album (Blush) in the top ten, they are getting the recognition they deserve and they are just great lads.

“They have had a big hand in how well we have done as a band really, because they took us out on our first proper tour. We had done DIY tours for a couple of years and it was their first UK headliner in January last year and they took us out for that.

“It was amazing and that put us on a bit of a trajectory and we started to get more tours off the back of that! They are largely responsible for us doing quite well in this country and it is really nice to be able to do their second album tour as well. They are massive shows – the biggest they’ve ever done – and that we’ve ever done as well as a support band.

“I am really looking forward to it, it is a short run, but it is with Turnover as well. I really like that band and think they are really cool.”

YOU ARE FINALLY HEADING OUT TO AMERICA AS WELL, PRETTY COOL RIGHT?

“We literally go to America and Canada the day that tour finishes – we are pretty much constantly on the road until Christmas time.

“We had some bad luck with America and had to pull out of the US tour we were booked on so this will be the first time we have been to the United States – it is not full USA, though, it is just the East Coast. We get to play six or seven shows in Canada, which is wicked because most tours tend to only to Toronto.

“I have some relatives and friends there so it will be sick to go and explore that country. You could tour USA for three months – I was listening to a Podcast with a guy from Touche Amore and he was saying how they have been touring the US consistently for the last seven years and they have still not technically played in every state. It is barmy how big that place is!

“You need at the very least a month to do a US tour properly, but should be there for six weeks really. It sucks, though, because you’ll play all across America and will still get people whinging that you aren’t playing their town. I guess that is the case with it being so big.”

IT IS QUITE COOL THAT BANDS LIKE BOSTON MANOR, MODERN BASEBALL ETC. ARE COMING TO NEWCASTLE IN THE NEXT FEW MONTHS – HAVE YOU SEEN A RISE IN THE INTEREST OF POP-PUNK?

“What I will say is that people’s tastes have diversified so it is not just strictly pop-punk bands, like I don’t think of us as a pop-punk band anymore. Particularly our album and the tunes we are messing about with for future release, but kids are not only into that now.

“Kids are like ‘I am a hardcore kid and I only listen to hardcore’ and have a lot of pride in that. People are listening to all kinds of genres which encompasses a big scene really, which is quite nice really.

“Even us and Moose Blood are quite different, but some enjoy us as the same. Selfishly we can say we get to tour with different bands and we do not end up on the same bill and the same kind of bands. We get to enjoy lots of different types of music ourselves.”

YOU SPEAK THERE OF DIVERSIFYING YOUR MUSIC – WHAT STYLE IS THE ALBUM GOING DOWN?

“We sort of took Saudade as the blueprint and the idea was to expand on that. If you like that EP you will like the album, but there are songs with a familiar sound and a few that are further from that.

“All bands do evolve and no band wants to make the same record twice. We pushed our own boundaries and step outside of our comfort zones for this. We have been like: “Be brave. Go with it.

“We are not reinventing the musical wheel, but we were just testing ourselves and I am really proud of them!

“We will never be the kind of band who do a total 180 on our sound, not that there is anything wrong with that, but I can’t see that being something that Boston Manor will do.”

CAN WE EXPECT THE SETLIST TO BE EXCLUSIVELY ‘BE NOTHING?’

“There will be a bit of everything, but yeah, we will be playing a lot of the album on tour. We will still play some songs from Saudade and possibly one song before from that period.

“The Moose Blood shows are a week after Be Nothing comes out so hopefully people will be a little bit familiar with them. We are writing new music all the time and bands always try to be creative with new things.”

HAVE YOU HAD MUCH OF A RESPONSE TO THE ALBUM YET?

“It has been so great – overwhelmingly positive! It is interesting because our fans are pocketed around in different countries, mainly because we are a young band, but we see people from Czech Republic or Brazil saying their friend sent them to us.

“This band is the most important thing in my life, so it is hard when you see someone destroy the past year of someone’s blood, sweat and tears in one ignorant comment.

“We started writing this record in September last year so the exposure is the product of hard work. No one, yet luckily, has said this is shit, which always happens! It really baffles me at how people can be so quick to dismiss something without acknowlodging the amount of time and work and soul has went into something.”

COMPLETELY AGREE – USE RADIOHEAD AS AN EXAMPLE – THEIR SOUND HAS CONSTANTLY CHANGED AND THEY ARE DOING ALRIGHT, AREN’T THEY?

“It is like, how have people not got this yet?! Every single Radiohead album sounds different..what were you expecting?!? Have you heard that new album? It is fucking amazing!

“I heard it at about four in the morning just after I got into bed, but it is that kind of album where you just have to lay down and listen to it. That is a band who are constantly putting out sick stuff!”

YOU ARE TOURING PRETTY MUCH FROM NOW UNTIL CHRISTMAS – HOW WILL YOU KEEP YOURSELF OCCUPIED FOR THREE MONTHS?

“Good question! I am going to buy Pokemon Red because it has been too long! I am learning – and have been for years – German. I am going to commit to that and see if I can get semi-fluent in the next three months.

“Podcasts, as well! We all listen to loads of podcasts and trade them a little bit. Spotify too – I only upgraded to premium recently and it is definitely worth the £10 a month.”

SPOTIFY IS EXCELLENT, DO YOU THINK IT HAS CHANGED THE WAY BOSTON MANOR PUT MUSIC OUT?

“Yeah totally. The music industry is not what it was five years ago, but I think people know that now. It is an ever-changing landscape, but things like Spotify are an integral part of how it all works really.

“I do not think we would have as many fans as we do if they did not have Spotify.”

WHAT IS THE PLAN FOR POST-TOUR?

“We have plans until the end of the next Spring and we have had a quiet summer so it will be a welcome change!”

Order Be Nothing here.