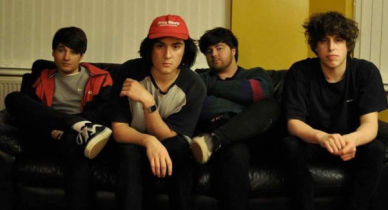 HARTLEPOOL four-piece Plaza entertained a crowd mixed with friends, nightclubbers and local music writers during their performance at Mixtape.

It was their first gig of 2016 – more importantly the first as a four-piece. One less member did not affect their sound majorly.

NGOD were the headline act and they watched Plaza’s set from the bar.

They rattled through the set including Antumbra, Fig 1 and Origami. Origami was introduced as: “An old song that we thought was shit but now think it is good.”

Although this was only a ‘support slot’ before a club night, passion was still very much in the band. Front-man Brad Lennard lost a shoe halfway through the gig and carried one with just the one.

By the end of the set both shoes were off and he was sliding around the stage.

Totem was introduced as Plaza’s next single. Coming at the end of the month it is a fantastic track full of repetitive riffs and toe-tappingly catchy drums.

The set finished with Blood Orange. A ‘new’ song that has been played before, but has since been properly recorded and “will be released after the festival season.”

After last night’s performance it is clear that even though they are a member down their on-stage presence has not been affected.

“Thank you. We are not Plaza,” were the final words before the band left the stage.

Be sure to catch Plaza on tour with Trash next month. Tickets here.

Listen to more of Plaza’s music below and download the EP here: PLAZA BANDCAMP.

3 thoughts on “A REVIEW OF…PLAZA IN MIDDLESBROUGH”