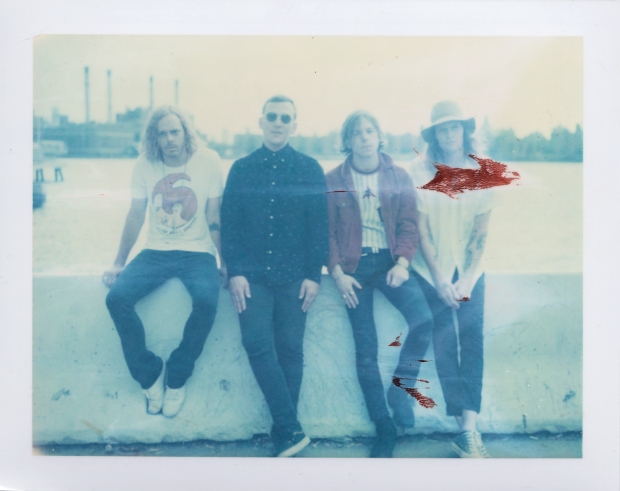 I talked Foals, Guinness World Records and what the band will be listening to while travelling around Europe with front-man Matt Shultz.

Chatting before their show at Burbank, California they were rushed for time so we had to keep it short and sweet.

Straight onto the subject of the UK tour, Shultz confesses his love for the UK, saying: “Coming to the UK is something that we have really wanted to do over the past couple of years. We have got to start somewhere!”

The target given by their label was to make themselves a household name in the United States. Shultz explained: “They [the label] wanted us to stick with America for a few years, but everything is going well there so we are finally coming back to England.”

Last playing in the UK in 2014 with Foals and at Reading and Leeds, Cage The Elephant wanted to crack their home nation before ripping up stages in the UK.

CAGE THE ELEPHANT and FOALS will reunite for a US tour

Foals have just been announced to play alongside Cage The Elephant on several US dates for the Spring Fling Rock AF tour.

Shultz spoke very highly of the Oxford alt-rock band: “Oh, dude! They are great guys, they are one of the few special live bands in the world. Pretty much every show is amazing, I have never seen them play a bad show.

“I look forward to playing with them again – they are great company as well!”

Speaking at last year’s Lollapalooza festival, Matt Shultz revealed that he received a Guinness World Record. This was something that I wanted to find out more about.

The record is “The first person to crowd surf from front to back at Red Rocks, Colorado.”

He laughed somewhat awkwardly when the subject is brought up. Trying to play down his achievement saying: “It is one of those stupid accomplishments that are not worth mentioning.

“People are curing diseases or creating amazing, modern technological advances. Then you get to me and all I can say is I am the first person to crow surf front to back at Red Rocks.”

This is just a glimpse of Cage The Elephant’s live on-stage antics. Shultz prides the band on their ability to freely allow a wild performance.

“We always allow the live shows to take their own form so we are definitely going to try and keep to that when we are in the UK.” 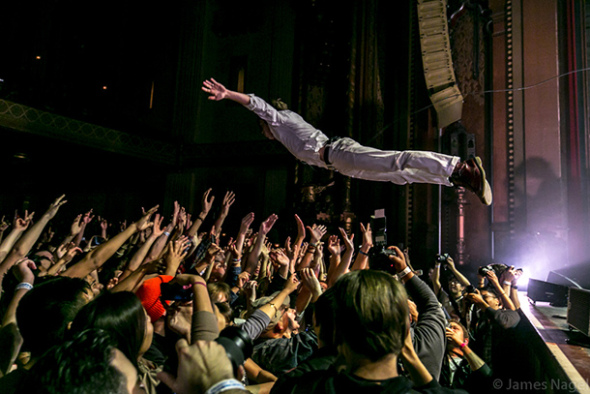 Tell Me I’m Pretty was released on 19th December 2015 so the upcoming tour is primarily to promote tracks such as Cry Baby and Trouble. However, Shultz assured fans that old favourites will still be added to the setlist.

“It is definitely going to be mixed bag. I think we are going to shape it to our more recent releases. There will probably be more Melophobia and Tell Me I’m Pretty stuff than others.”

I hinted to him that Melophobia was my favourite of their four albums. Prompting him to admit: “There will be a lot of Melophobia for sure.” Buzzing.

Dan Auerbach produced Tell Me I’m Pretty and used a lot of “first or second” takes when finalising the album. Shultz described the experience of working alongside The Black Keys guitarist and vocalist as: “A good experience.”

He briefly explained how the recording process worked: “Dan would do this thing where he cut a track then take us into the control room and play obscure songs. Like Afrobeat or Cuban jazz or garage.

“Then once we were all catching the vibe we would go back into the studio and play something. It would not directly effect the composition but it definitely directed our attitude.”

As with Foals, Shultz can’t praise Auerbach highly enough, saying: “I think we challenge each other in a complimentary way. Dan has this incredible ability to go with his first gut reaction and by doing that he keeps you from self sabotage.”

Even though Cage The Elephant had already released their self-titled debut, Thank You, Happy Birthday and Melophobia; Tell Me I’m Pretty has a more raw and organic sound.

Auerbach’s gut reaction is the main reason for this, but there was always an intention by Cage The Elephant to head down this route eventually. Shultz revealed: “We really wanted to hear a rawer sound from ourselves.

“I heard a quote that said if someone else had been making your records, you would hear them and want to make new music and we really prescribed to that approach.

“The way that people listen to music today seems archaic and everyone is too comfortable in a contemporary world. Dan is a guy that has created these kind of records at the highest level, so he was perfect for right now.”

Cage The Elephant’s slot at 2014’s Reading and Leeds Festival allowed them to showcase six tracks up to the Melophobia era. Festival goers will be hoping they will return this summer.

Shultz gave a large hint without saying too much when I asked whether they will be back this summer.

“Oh yeah! In fact, this year the UK is going to be a big part of our focus, hopefully for the next few years. This summer we will focus on European and UK festivals rather than those in the United States.”

No festivals were revealed during the interview, but any of the major UK festivals would suit the Kentucky five piece.

Alongside the February tour which stops at Newcastle’s intimate Riverside venue on February 15th, Cage The Elephant hope to return to British shores later in the year.

Excessive touring does not allow much free time for the band, but Shultz explained that he: “just tries to keep busy really. I enjoy all different aspects of creative work and do some bits on the side too.”

I asked what will be soundtracking their journey around the UK, Europe and USA when they set off on their tour next month. He revealed a wonderful list of bands that are well worth listening to.

“I’m getting really into this band called Mild High Club. Then there are Wolf Alice, Hinds, Fly Golden Eagle, Clear Plastic Masks, Chrome Pony, The Growlers and The Allah Las.”

His main musical interest at the moment is Devendra Banhart. Shultz spoke in depth about the Venezuelan musician:

“I have looked back at his work, but he put out this record called Mala a few years ago and I think it is one of the most brilliant albums that has been put out for a while. He is so incredibly informed and seamlessly combining all these different world sounds and styles without compromising the colour or, in better words, the catchiness of the songs.”

Shultz said that David Bowie influenced Tell Me I’m Pretty and with the sad news of Bowie’s recent passing I closed the interview by quizzing him on his favourite Bowie song.

“My favourite David Bowie song is Ashes to Ashes. I love so much of his work but I always go back to that song for some reason. I love the idea that he is revisiting Major Tom and things aren’t going too well for him.

“It is just so incredible. It is a great concept and most artists try to stay away from past work, but to so boldly go back and write a song that is entirely about an old song is genius.”

2 thoughts on “AN INTERVIEW WITH…MATT SHULTZ (CAGE THE ELEPHANT)”