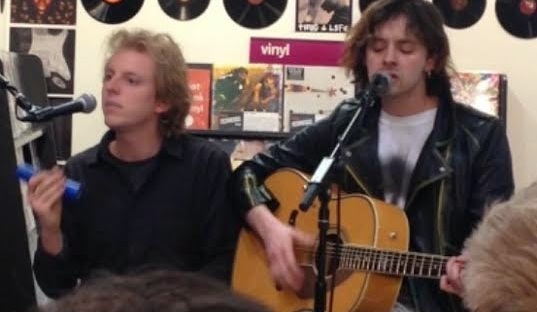 A 300 capacity crowd stormed the store in the Arndale Centre after the band announced on their Twitter they were adding in-store performances to their J’adore tour.

Alongside performances, fans had the chance to chat to the band and get their copy of Happy People signed.

As part of the HMV reward scheme, Sam Carson was able to get to the front as well as receiving a free Happy People CD. He was the first to meet Harrison and Dominic and told me me how Harrison revealed that Peace will be playing Reading & Leeds Festival again this year.

The HMV signing is prior to a string of Manchester gigs for Peace in March, it will certainly be devastating for fans who haven’t got tickets to the March tour after the performance given by Koisser and Boyce.

Before the release of Happy People, there was an option from Peace’s official website for fans to order exclusive signed copies of the album, both on vinyl and CD. This is an easy way for bands to show fans that they still care for them.

Bearing in mind that vinyl copies of In Love are now going for £80 upwards, signed copies of Happy People may be a tidy investment. Don’t let the cost fool you though, Peace are certainly no massive headline festival band, they’re a chirpy bunch of friends from Birmingham. Maybe 2015 is the year for them though..

2 thoughts on “A REVIEW OF…PEACE IN MANCHESTER (HMV SESSION)”