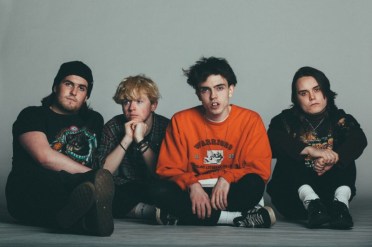 When Jaws last played at Newcastle’s Think Tank? their debut album Be Slowly had just been released.
Last night they played a set consisting mainly of tracks from said album. Several fans packed into the tiny Think Tank? Venue in Newcastle. Even though the venue is hardly three metres tall there was crowd surfing and most pits galore.
The Birmingham four-piece opened with latest single What We Haven’t Got Yet much to the delight of the wild crowd. Front-man Connor Schofield was appreciative throughout the set.

At the Think Tank? gig last September Schofield wore a Newcastle United football shirt, last night it was French side Paris Saint Germain whose shirt he donned. Earlier Tweeting it was for the tragedies, a real touch of class.

As well as Be Slowly, Jaws’ other release is Milkshake EP. Tracks from this EP such as BreeZe and Friend Like You were performed last night.

The first single released after Be Slowly was the grunge influenced Bad Company. This sound was an unexpected one from Jaws and I was unsure of it at first. However, when I heard it live I realised just how much of an anthem it is.

As the night came to a close Connor said: “This is the part of the show where we would usually go off for a bit.” Instead of doing so they continued playing the dreamy Surround You.

The final song was Be Slowly hit Gold. The crowd went wild for one final time and shouted the words back at the band to show their appreciation for such a wonderful evening.

By the time Jaws next tour their new album will hopefully be out. If the new songs showcased last night are anything to go by it is certain to be a belter.

2 thoughts on “A REVIEW OF…JAWS IN NEWCASTLE”